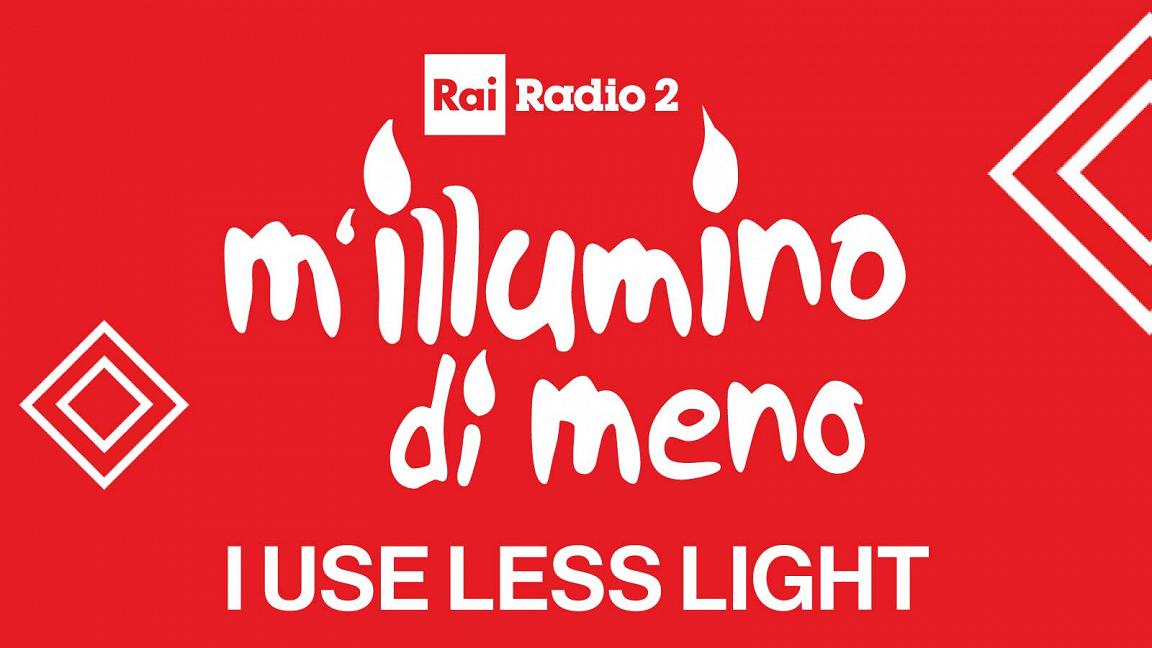 
Caterpillar Rai Radio2
On air every afternoon for 24 years, Caterpillar deals lightly and ironically with current affairs and major issues of modernity. Listeners intervene live, without filters, from all over the world. The themes of environmental sustainability, safeguarding the planet and the dangers of climate change have always been central elements of the program. It is conducted by Massimo Cirri and Sara Zambotti.


Caterpillar has been organizing the Day of Energy Saving and Sustainable Lifestyles (The Day in the following) "M’illumino di Meno" since February 2005. This comes with the invitation to turn off, symbolically, the lights in the afternoon of February 16th, anniversary of the entry into force of the Kyoto Protocol.

In preparation for the Day the program promotes a more rational use of energy resources, suggests ways and approaches to reduce waste policies, shares innovations and projects implemented by the various members.

A good deal of virtuous environmental and scientific practices, as well as efficient administration, have developed around the Day. They have developed over the years with technological and administrative changes, they have been shared and participated by the entire community of listeners who in turn have integrated and enriched them: institutions, private citizens, schools and universities, companies, museums, sports clubs, third sector associations have immediately and actively joined the Day.

On the Day, the major Italian squares and all the most significant monuments of the country are turned off simultaneously, including, to name a few, the Colosseum, the Tower of Pisa, the Arena in Verona, Piazza del Campo in Siena, the Valley of the Temples in Agrigento, Castello Sforzesco and the Madonnina del Duomo in Milan, the Mole Antonelliana, Piazza Castello and the Galleria Sabauda in Turin, Piazza San Marco in Venice, the Maschio Angioino in Naples, the excavations of Pompei, the Riace Bronzes, Palazzo Pitti in Florence, the Reggia di Caserta, and the Cinecittà studios.

The 2008 edition has been promoted on an international scale. On that occasion lights have been turned off at the Eiffel Tower in Paris, the Prater Wheel in Vienna, the Nelson’s Column, Trafalgar Square and the Foreign Office in London, Sofia’s National Theatre, Edinburgh’s Castle, the City Hall and the Church of St. George in Athens.

In 2011, in conjunction with the celebrations for the 150th anniversary of the Unification of Italy, Caterpillar summoned 150 mayors from all over the country to sign a commitment to administer their cities with caution in the name of environmental sustainability. Many city squares turned off all over the country while displaying the Italian tricolor theme.

In 2014 the focus of the Day has been the involvement of museums across Europe, to emphasize the centrality of culture in changing lifestyles. Representatives of many embassies have been confronted on energy issues; the major Italian museums and the National Gallery of London have joined.

The heart of the 2015 edition have been schools of all levels, including Italian schools abroad, which were asked to symbolically manifest their love for the planet with special initiatives. Astronaut Samantha Cristoforetti, from the International Space Station, photographed and tweeted the simultaneous shutdown of the Peninsula.

In 2016 the Day was dedicated to sustainable mobility and cycling with the “Bike The Nobel” initiative, nominating the bicycle for the Peace Nobel Prize. Ten thousand signatures were collected in support of the initiative among citizens and the official candidacy was advanced with the support of 118 parliamentarians from all sides.

In 2017 the campaign proposed a gesture of sharing. It is demonstrated that the greatest energy loss is caused by waste in all areas of our consumption: food, transports, communication. For this reason, Caterpillar invited all listeners to get involved by sharing as they could: giving a ride to colleagues, organizing a collective dinner in their flat, opening their wireless network to their neighbors and generally sharing their resources in a concrete gesture against waste and to encourage sociality.

In 2018, the focus of the campaign was the beauty of walking. Because the Earth is below our feet and to save it we need to change step. The invitation was to symbolically reach the moon by foot by organizing a march, a procession, a snowshoe hike, a relay race, a marathon and, for schools, the pedibus.

In 2019 M’illumino di Meno focused on the circular economy as a system that encourages the reuse of materials and the reduction of waste. The focus was moving away from the “end of life of things” mentality. Resources run out but everything can be regenerated: mineral water bottles become sweaters, newspapers become newspapers again, a telephone handset becomes a lamp, sludge becomes biogas.

In 2020 the invitation was to plant trees and plants because they feed on carbon dioxide. Trees and plants emit oxygen, filter pollutants, prevent soil erosion, regulate temperatures and are wonderful machines for reversing climate change. But we have little time and the global thermometer continues to rise: so the edition’s theme was let's plant trees. Scientists around the world also agree: reforestation.

In 2021 the edition was dedicated to the “Jumping the Species”, the ecological evolution in our way of life that we absolutely must implement to come out of the pandemic as a better Species. The invitation was to tell and share the small and large leaps of species in our personal lives: those already made and the planned ones, from mobility to living, from food to circular economy.

In 2022, the eighteenth edition is dedicated to cycling and greening: Pedalare, Rinverdire, Migliorare. The campaign will promote the use of bicycles by following the ultra-cyclist Paola Gianotti in her trip across Europe from Stockholm to Milan. Schools and citizens will also be invited to plant as many trees as possible, together with the Carabinieri Biodiversity Division, as a tool to mitigate global warming.

The lights switching off on the Day will be accompanied by many festive events organized throughout the country: zero impact concerts, large collective dinners by candlelight, sporting events in the dark, meetings on energy and sustainable lifestyles in schools of all levels, theatrical performances powered by bicycles, street festivals that focus on saving energy not as a sacrifice but as a “pride” of intelligent optimization and respect for the Planet.

The most important result of the Day is to have spread a clear message on the impact of daily behavior on energy consumption: from turning off the stand-by of household appliances to the use of energy-saving bulbs, from the application of the breakers in the taps to the adhesion to car-sharing, from the separate collection of waste to the choice of sustainable mobility.